What you need to know, and the steps to take:

First, it is important to note that there is a lot of information on this topic, and we attempt to provide you with the best understanding of important details below.

On November 8th, 2016, the Colorado voters voted by a two to one majority to approve a new law for physician-assisted dying, commonly known as “death with dignity.” This makes Colorado the sixth state to pass such a law (following Washington, Oregon, California, Vermont, and Montana). The law is based on Oregon’s Death with Dignity Act (1997). The concept of death with dignity has gained momentum nationally based on the idea that terminally ill individuals have the right to choose elements of their care at the end of their life, including the manner of death. The new act will allow residents of Colorado who have terminally ill medical conditions and possess the ability to make informed decisions the right to request that their attending physician prescribe a lethal medication to facilitate the end of their life. Physicians and healthcare facilities are not obligated to participate in the new law.

The End-of-Life Options Act contains several requirements aimed at protecting patients’ rights and ensuring the integrity of the process. One important requirement is that the individual requesting the prescription possess the capability of making an informed decision. The attending physician cannot write the prescription unless two health care providers determine that the individual is capable of making an informed decision.If either of these physicians believes that the capacity to provide informed consent is compromised, that physician shall refer the individual to a licensed mental health professional for determination of whether the individual is capable of making an informed decision. That is, in cases where capacity is not crystal clear, a licensed mental health provider, defined as a psychiatrist or psychologist licensed to practice under Colorado Revised Statutes, must evaluate for decisional capacity. According to the law, if the licensed mental health professional determines that the individual is not capable of making an informed decision, the attending physician shall not prescribe aid-in-dying medication to the individual.At Rocky Mountain Forensic Psychiatry, we do not take a position in support or opposition to the law, but based on experience from Oregon and other states, the law will create debate. Arguments in favor of the death with dignity movement tend to cite patients’ right to autonomy and the ability of the law to relieve suffering. Opponents to the movement often cite moral wrongfulness in taking any life and discriminatory concerns over claiming that living with a disability is not a life worth living.It is plain that the Colorado End-of-Life Options Act will present issues that thoughtful and prudent physicians should consider proactively. We believe that the extreme potential personal ramifications for individuals and their families should necessitate a higher degree of scrupulousness on the part of physicians than the law itself requires. In other words, though the law sets the floor as to a minimum procedural standard, physicians and healthcare entities are free to set a higher floor with more stringent standards and with additional procedural safeguards.

The first reason this is crucial revolves around the nature of capacity assessments, which by definition are for a specific question at a given point in time. The language in the new law states nothing about time delays and how capacity assessments might evolve for a given person as they move through the process of requesting and obtaining the aid-in-dying medication. The fact is that a given person may find their thinking changing from point A to point B, and yet only have an initial assessment at point A.Secondly, capacity assessments are threshold determinations. That is, as the riskiness and consequences of the decision increase, so to does the threshold at which a person is found to have capacity. 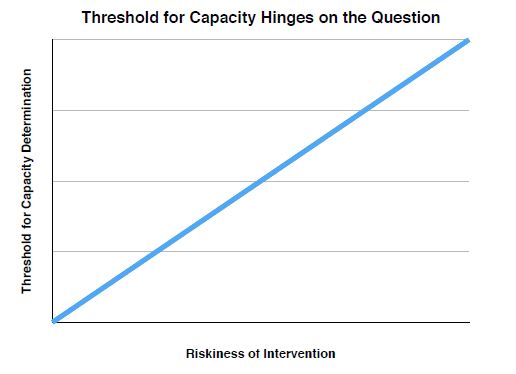 An individual’s decision to proceed with assisted end-of-life prescription medication may result in the ultimate irreversible outcome: death.  For this reason, at Rocky Mountain Forensic Psychiatry, we believe that these capacity assessments will need to be done in a more scrupulous and thorough manner than cases involving a less risky medical decision.

Complex cases often present with nuances that may be difficult for the average physician to appreciate.  Does the person demonstrate rationality?  Do they possess the ability to manipulate the relevant facts?  Unraveling questions such as these, as well as deciphering the difference between knowledge and appreciation, may explain the fact that many non-psychiatrists feel less confident compared to psychiatrists at performing capacity assessments.

There is also recent data out of states that have already implemented similar laws that may be helpful to Coloradans about how to effectively practice the new law.  In Washington and Oregon, people follow through with the law more often for peace of mind than pain (36% in WA and 25% in OR is based on pain).  The focus for terminally ill patients seems to be more concern about dignity and control rather than pain.  This may present nuanced elements present in a person’s rationality for pursuing the medication that will need to be explored during a capacity assessment.

Outcomes in Oregon have shown that physicians have been wrong about just how “terminal” an illness is.  In other words, a person is told that they have six months to live and then they go on to live for two or more years!  Prudent providers will engage patients in a hypothetical conversation about how they might think about the decision to proceed with the new law in view of this data.

There has been an under-utilization of mental health expertise.  In Oregon, only 5.3% of cases that resulted in a prescription being written involved a referral for a psychiatric evaluation.  The data is not available, but it is possible that 100% of the glaringly obvious cases where a person did not have capacity simply did not rise to the level of requiring a mental health expert and the attending physician was comfortable making that determination without the expert consultation.  However, it is also possible that patients fell through the cracks and that some percentage of those ultimately receiving the lethal prescription would have benefited by a more thorough capacity assessment by a trained and licensed expert in capacity assessments.

Here are some sobering statistics:
•    In Oregon, 25% of those making requests for physician-assisted death had evidence for clinical depression.
•    Non-psychiatrists frequently fail to diagnose depression (12-25% detection rates in a variety of medical settings).
•    The relationship between mental illness and capacity in dying patients is not clearly defined.
•    In terminally ill patients, treating depression lessened the desire to hasten death.
•    In Oregon, only 6% of psychiatrists felt very confident in their ability to decipher mental illness significantly influencing decision-making capacity.
•    In one study, 58% of American forensic psychiatrists felt that a diagnosis of Major Depression should result in an automatic finding of incapacity regardless of the decision of physician-assisted dying .
•    In one studty, 78% of American forensic psychiatrists surveyed believed that “a very stringent standard should be used to determine competence to consent to physician-assisted suicide.”
•    Only 11% of American forensic psychiatrists thought that any licensed physician could perform the required capacity evaluation.

Based on all of the above, the evaluation of terminally ill patients seeking aid-in-dying medication should ideally involve more than just a bare-bones capacity evaluation.  At a minimum, clinical psychiatric considerations including demoralization and depression should be thoughtfully examined, in addition to a thorough capacity assessment performed to the highest of standards.

As a final note, the End-of-Life Options Act presents ethical questions.  Although the new law strictly defines the behavior in a way that it is not to be considered suicide, this is at odds with the current definitions of suicide used by the Centers for Disease Control and Prevention, the American Psychiatric Association and the American Psychological Association.  The American Psychiatric Association does not currently have a position statement regarding physician aid-in-dying, but a resource document is in the process of being created.  The American Medical Association cites in Opinion E-2.211 that “allowing physicians to participate in assisted suicide would cause more harm than good.  Physician-assisted suicide is fundamentally incompatible with the physician’s role as healer, would be difficult or impossible to control, and would pose serious societal risks.”  There may be cases where physicians or hospitals should consider ethics consultations.

Physicians and hospitals will not be obligated to participate in this act.  However, those that opt-in would be wise to familiarize themselves with elements likely to pose foreseeable barriers in the process of arriving at an ultimate decision to prescribe a lethal medication to a terminally ill patient who requests it.   Our position is that all cases of terminally ill patients who are seeking help in dying from healthcare providers should be referred to a mental health provider.  Further, because of the complexities outlined above and the nature of stringent standard by which these capacity evaluations should be completed, we recommend consultation with a forensically-trained psychiatrist who may have additional skills and expertise in performing the necessary evaluation and providing comprehensive and more legally sound documentation of the rationale behind the outcome of the evaluation.

At Rocky Mountain Forensic Psychiatry, we are available to perform mental health evaluations for individuals pursuing the End-of-Life Act for questions related to capacity, screening for mental illness, or for consultation in areas ranging from clinical decision-making (e.g. treatment of depression) to ethical dilemmas.  For more information, Contact Us.

The latest data from Oregon:
https://public.health.oregon.gov/ProviderPartnerResources/EvaluationResearch/DeathwithDignityAct/Documents/year18.pdf